Jewish Students Reported a Professor for Anti-Semitism. Their University Retaliated Against Them. – Washington Free Beacon

On the first day of classes last fall, a psychology professor asked students in one of George Washington University’s required diversity courses to share their names and identities. The professor went around the room “affirming” each student’s introduction, until one student said she was born in Israel.

“It’s not your fault you were born in Israel,” the professor, Lara Sheehi, told the student in the postgraduate Professional Psychology Program, according to a classmate in attendance who spoke with the Washington Free Beacon.
The remark set the tone for a contentious semester with Sheehi, who consistently harassed her Jewish students and then retaliated against them when they raised concerns with the administration, according to a Title VI discrimination complaint filed Thursday with the Department of Education.
“She began to retaliate against us,” one of those students told the Free Beacon. “She began to spread lies about us to the faculty—smearing our reputations to the people who are going to be our clinical supervisors for years to come.”
Compiled from student testimonies provided to the anti-Semitism watchdog Stand With Us, the complaint says Sheehi accused the students of racism, encouraged classmates to demean and exclude them for their Jewish identity, and took disciplinary measures against them after they confronted her. The group says the university condoned the professor’s actions.
Neither George Washington University nor Sheehi responded to a request for comment.
Sheehi teaches “decolonial, liberatory, and anti-oppressive theories and approaches to clinical treatment,” according to her faculty biography. An advocate of the anti-Israel Boycott, Divestment, and Sanctions movement, she coauthored a book titled Psychoanalysis Under Occupation: Practicing Resistance in Palestine. Her social media is littered with anti-Semitic statements, where she slams all Israelis as “fucking racist” and declares that it is “so fucking ridiculous how Zionism works.” 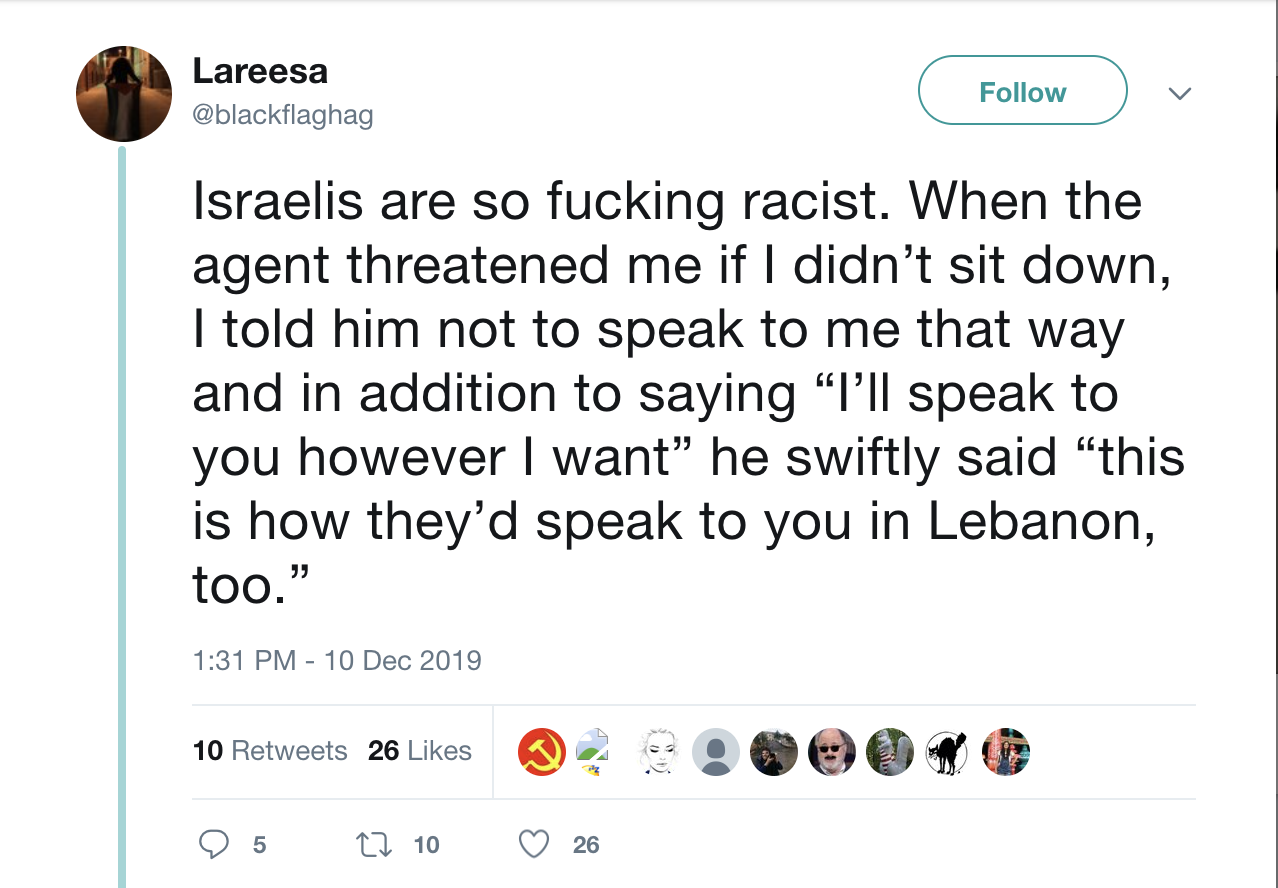 “Destroy Zionism and commit to land back, then we’ll take you seriously you fucking genocidal fucks. Fuck you,” she said in a tweet directed at the Israel Defense Forces. 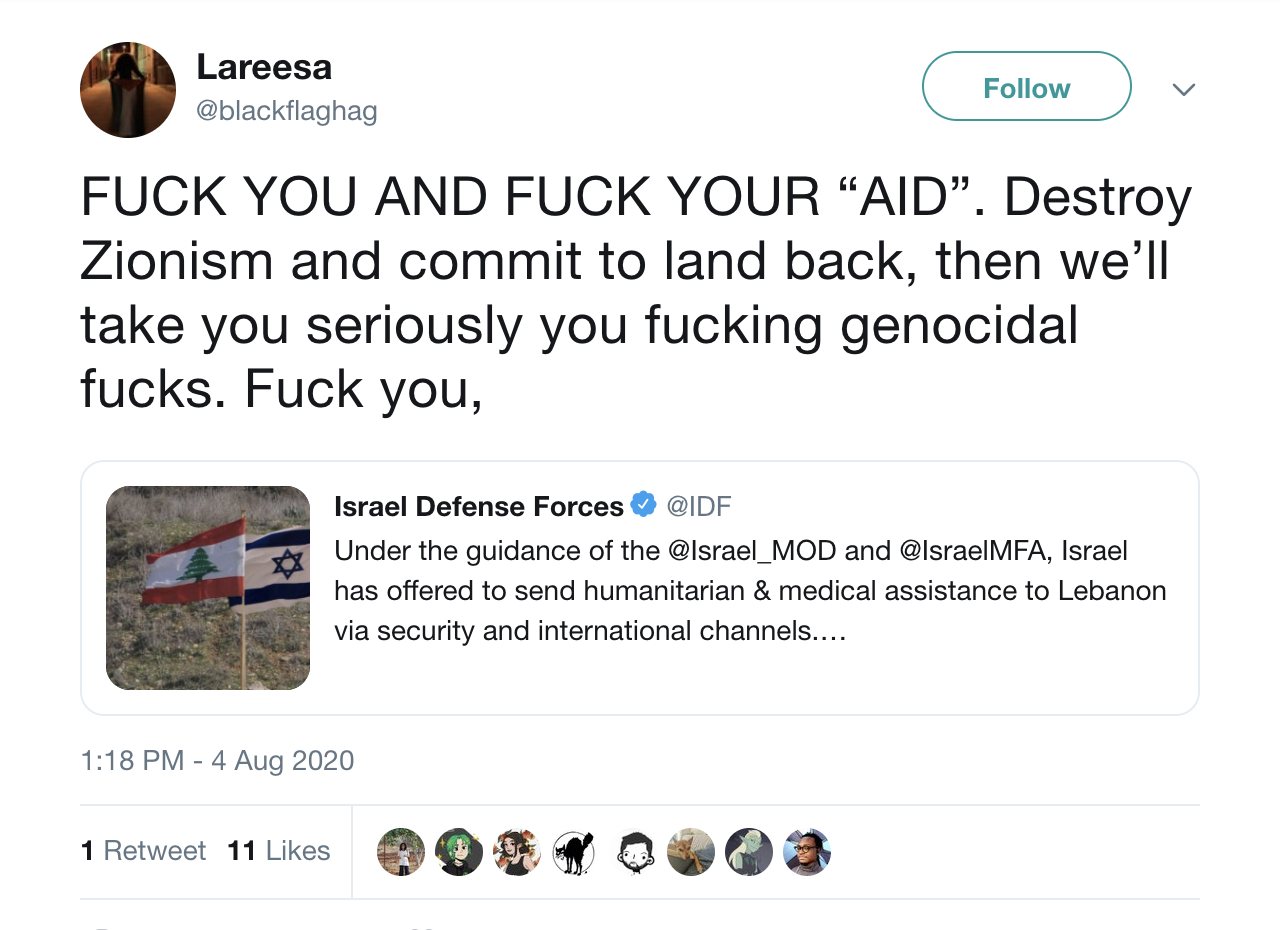 During the one-semester course, Sheehi subjected Jewish students to anti-Semitic coursework and lectures, at times suggesting their failure to acquiesce would threaten their future as clinical psychologists. In September, she invited a radical speaker to campus who has falsely claimed that Israel tests its missile systems on Palestinian children.
The event occurred between the Jewish High Holy Days of Rosh Hashanah and Yom Kippur. The speaker, Dr. Nadera Shalhoub-Kevorkian, used the occasion to denounce “white Israeli racism,” accuse Israel of using global relief work “to camouflage” its “oppressive power,” and call for violence against Jewish people. The visiting professor went on to praise a Palestinian teenager who attempted to stab two Israelis to death in 2015.
The Jewish students told Sheehi they felt targeted by the talk, questioning why they had been subjected to “a two-hour diatribe against one group—namely, Jews,” the complaint says. They noted other regimes known for human rights abuses like China, Russia, and Iran would likely not have received similar treatment. One of those students posted in a group chat for the class that the speaker’s talk also had “little to do with being a stronger clinician.” Another pointed out that there were no course readings on anti-Semitism for a class on “diversity awareness.”
But Sheehi denied the students had experienced anti-Semitism and told them the speaker’s remarks were “in keeping with the class approach of ‘disrupting,’” according to the complaint. She then went further and condemned the student for having made “damaging Islamophobic anti-Palestinian” comments about the guest speaker. In another heated class debate that term, she tacitly approved of fellow students calling out what they termed their Jewish classmates’ “white fragility.”
Behind closed doors, Sheehi slandered the students to other faculty members, claiming they were racists who called the speaker a “terrorist” and used assignments as an excuse to get “combative” with her, the complaint states.
The Jewish students spoke with their department’s chair and an unnamed dean about Sheehi’s conduct. But neither took action against the professor. The dean informed the students their only recourse would be to withdraw from the course and take it again the following year. He also denied Sheehi had engaged in anti-Semitism.
Another George Washington faculty member was tasked with overseeing a “restorative circle” to address concerns from one of the Jewish students. That professor doubled down on the use of anti-Semitic tropes when engaging with the student, suggesting that a Jewish student in Washington, D.C., necessarily had more “power and privilege” than a Palestinian student.
In November, the Jewish students were told faculty had voted to discipline them but were not made aware of their specific offenses. Instead, they were asked to describe what they believed they had done wrong, or else receive a “permanent negative mark” on their academic records. The students will be similarly penalized if they repeat their unnamed offense.
Stand With Us is asking the Education Department to compel George Washington to reverse all punitive actions against the students and investigate their complaints against Sheehi. It is also asking the department to review the university diversity, equity, and inclusion curriculum for any anti-Semitic content and adopt the working definition of anti-Semitism approved by the Education and State Departments.

In the meantime, Sheehi is still teaching and promoting her brand of “liberation psychoanalysis” far and wide, including during a December appearance on the podcast “Voices From Room.” Her topic: “Making the Political Personal.”
Published under: Anti-Semitism , BDS , Campus , George Washington University , Israel
2023 All Rights Reserved