Hijab in Iran: From Religious to Political Symbol – Carnegie Endowment for International Peace

If you enjoyed reading this, subscribe for more!
Check your email for details on your request.
The death of Mahsa Amini on September 16, three days after her arrest by the morality police in Tehran, prompted the spread of large-scale protests in Iran, unprecedented in terms of both their geographic range and the diverse social backgrounds of the demonstrators. The movement has extended to large and small cities outside Tehran, including Kurdish areas—where Amini came from—and youth from across the socioeconomic and educational spectrum have taken part.
As the protests intensified, videos of women cutting their hair and burning their hijabs spread, acts which served as both an expression of anger directed towards the morality policy responsible for Mahsa Amini’s death, and a rejection of the policy of compulsory hijab more generally. However, the acts of hijab burning, and hair cutting did not merely launch a rebellion against government-imposed dress codes, but also came to symbolize broader demands for fundamental political and economic reforms.
This Sada debate addresses two important topics in the context of the ongoing Iranian protests now in their fifth week. The first topic raised in an article by Sara Bazoobandi is the freedom of choice for Iranian women, and the second is the unique opportunity provided by the current protests to drive forward positive change in Iran, which is the claim put forward in an article by Nima Khorrami.
Sara Bazoobandi argues that women’s struggle for freedom of choice began decades before the most recent protests launched in the aftermath of Mahsa Amini’s death, and she details the early history of women’s resistance to the regime. In fact, she notes that immediately following Ayatollah Khomeini’s 1979 announcement enshrining compulsory hijab in the workplace, Iranian women took to the streets to protest and were violently attacked by pro-Revolution forces that would later become the morality police that arrested Mahsa Amini. Thus, by tracing the historical roots of current unrest, Bazoobandi argues that Iranian protesters' current rejection of the headscarf does not necessarily mean a rejection of Islam, or Islamic values.
While Bazoobandi emphasizes continuity with the past, Nima Khorrami argues that the current protests differ from previous movements in three key ways: the prominent role of women in leading the calls for change, the wide-spread nature of the movement which has gained the support of not only the middle and working classes but also that of wealthy merchants and celebrities, and finally, the diverse geographic scope of unrest which has witnessed both small and large cities transformed into major centers of protest. These differences, Khorrami argues, make real change possible if international actors provide direct and indirect aid to Iranians struggling against the regime. 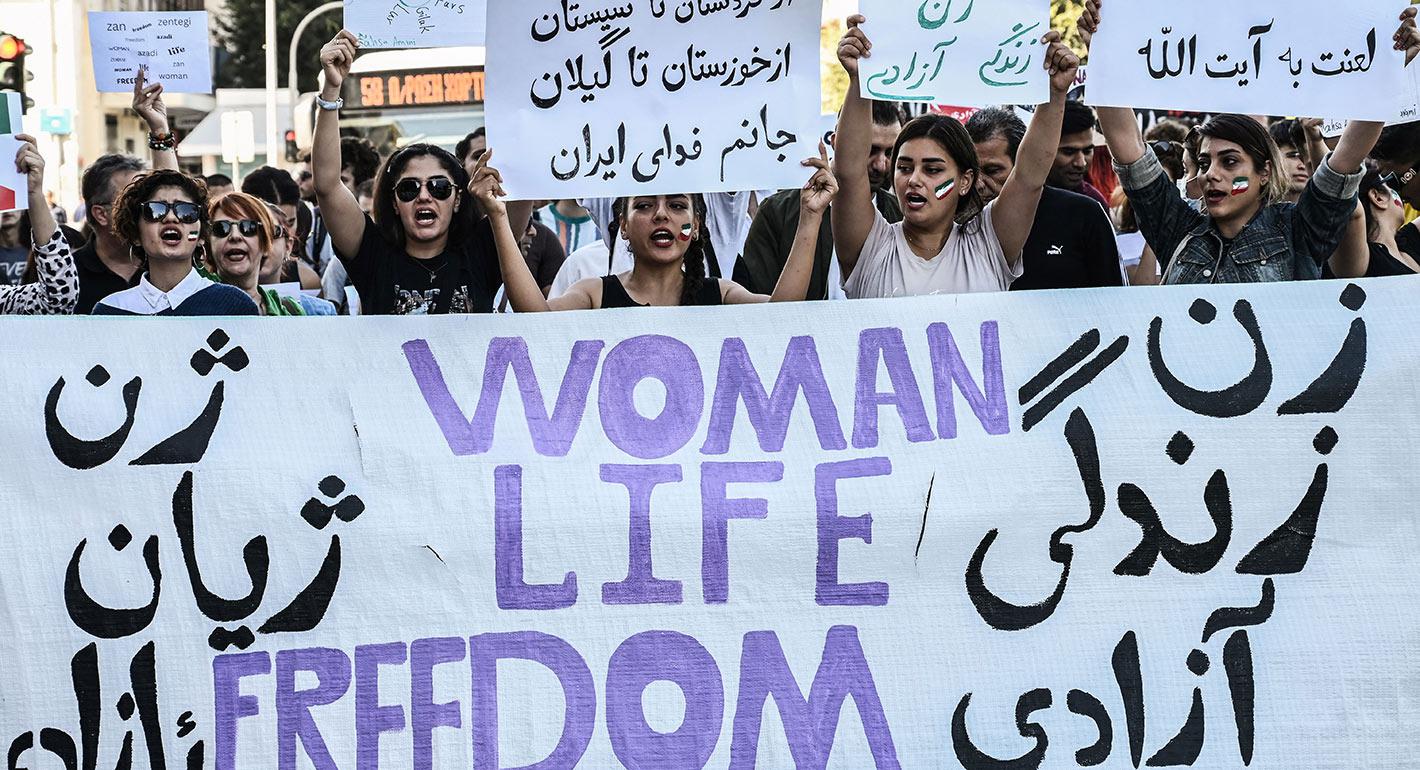 In recent weeks, the killing of Mahsa Amini while in custody for allegedly “wearing her hijab improperly” has outraged Iranians and sparked a new round of nation-wide protests. Iranian women’s fight against the state-imposed dress code, however, started as early as 1979. In fact, shortly after Ayatollah Khomeini was declared the official leader of the Islamic Republic, he immediately addressed the issue of women’s clothing, announcing that women would be allowed to enter their workplaces only if they complied with the compulsory hijab.
Soon after Khomeini’s speech was published in March 1979, Iranian women took to the streets to protest the violation of their freedom of choice. The protesters were violently attacked by pro-Revolution forces that would later become the morality police—the organization that arrested Mahsa Amini last month. That early protest against the state-imposed dress code led to years of socioeconomic marginalization of women who rejected the imposition of compulsory hijab. Many well-educated Iranian women, including doctors, nurses, and teachers, lost their jobs as a result of their involvement in that pioneering protest.
Moreover, many Iranian women lost the right to continue their education or return to work, allegedly for following an “inappropriate dress code,” even before the Islamic Revolution, as supporters of the Revolution tracked down information about women’s pre-1979 lifestyles. Women were even punished for the political backgrounds of their male family members. For example, many Iranian girls whose fathers were members of the pre-Revolutionary Iranian army were not allowed to attend university or take a job.
Indeed, since 1979, the state-imposed dress code has been tied to basic socioeconomic rights such as employment, education, and access to public spaces. Furthermore, the dress code also impacted Iranian men who were banned from wearing short sleeves, jeans, and bright colors in workplaces and universities. The state used its power to impose measures of control over every aspect of citizens’ public and private lives. Personal choices ranging from having mixed-sex weddings and birthday parties, listening to music, watching foreign movies, and owning dogs have all been subject to state interference in Iran.
As we see today, many of these early battles between the state and its citizens have remained unresolved in the post-Revolution period and have impacted new generations of Iranians, ultimately restricting their personal choices. Thus, the death of Mahsa Amini exposed the collective grievances held by the Iranian public. Women burned their headscarves in protests, which spread rapidly across the country, as a symbol of their rejection of the state’s control over their private choices.
Recently, videos of violent arrests of women by the morality police in Iran have circulated among Iranian users who consider the current dress code to be a sign of social and political backwardness. As such, these images have been juxtaposed with pictures of life before the Revolution which feature Iranian women—with and without hijab—interacting freely in public spaces. Through these images, Iranians have been mourning their loss of control over their private lives.
Across the world, the hijab is a personal religious choice made by women. In Iran, however, it was transformed into a symbol of oppression and marginalization. The current rejection of the hijab by Iranian protesters, therefore, does not necessarily equal a rejection of Islam, or Islamic values. Rather, it represents the anger and frustration of the people—namely women—who have been deprived of their basic freedom of choice for decades.
Sara Bazoobandi is a Marie Curie Fellow at the German Institute for Global and Area Studies in Hamburg. She is a nonresident senior fellow at the Atlantic Council. Her research focus is political economy of the Middle East, particularly Iran. Follow her on Twitter: @EastRisk 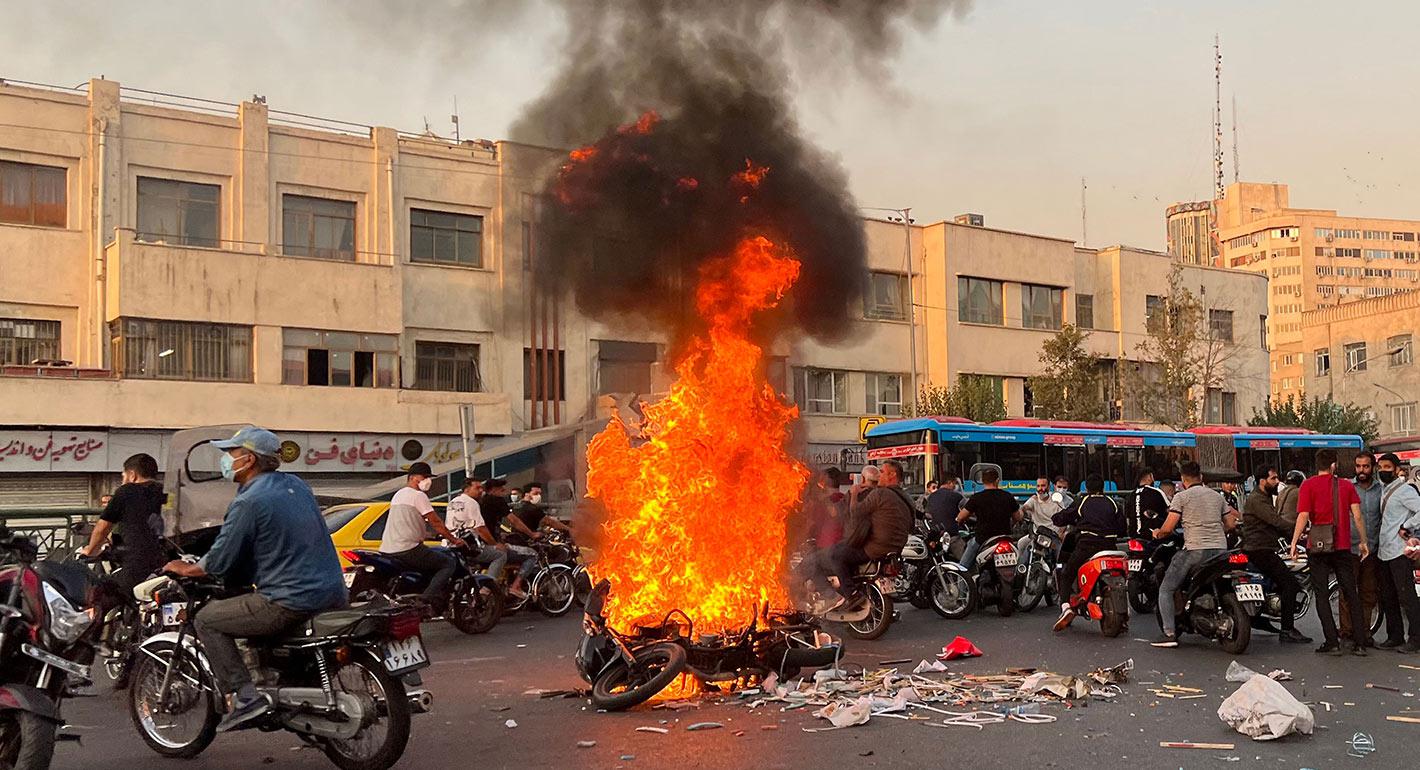 In what appears to have become a regular occurrence, Iranian cities have again become the scene of large anti-government protests since the murder of Mahsa Amini by the morality police. In response, the Iranian government has relied on its tried and tested tactics of brute force and mass arrests while simultaneously using its monopoly over media to delegitimize protestors. However, there are good reasons to be skeptical about the long-term effectiveness of the government’s actions this time around. The current standoff is taking place at a precarious time, and is also fundamentally different from the previous rounds of protests. As a result, it could lead to a new beginning in Iran, especially since there are now signs of disagreement and disillusionment among the regime’s current and former insiders.
One can detect three main differences that distinguish the current round of protests from previous ones. First is the prominent role of women in leading the charge for change. Faced with years of repression and barbaric socioeconomic inequalities which have deprived them of their basic rights, Iranian women today are adamant to reclaim their place and status as equals in society. Many have already stopped wearing the hijab.
The second difference is the truly widespread nature of the current protests which are not limited to the middle class, or the university educated. While the working class has been active in staging anti-government protests in recent years, today's protests have the backing of prominent celebrities, athletes, artists, and even wealthy merchants, or bazaris. This apparent loss of support among the working and upper classes is a major development signifying the emergence of a society-wide backlash against the regime’s model of governance and its outdated ideology.
Finally, and perhaps most importantly, the regime came close to losing control of a city, Oshnavieh, for the first time in its history. Relatedly, protests are not confined to big cities, and smaller cities have even become major protest centers. This could pose serious operational challenges for the regime’s security forces which might find it difficult to maintain a meaningful presence in both large and small cities. Tehran was successful in its suppression of past protest movements because they were mostly confined to large cities, which allowed the government to concentrate its resources on a handful of locations. Responding simultaneously to events in multiple locations, however, might require Tehran to ration its resources and rotate its forces, which could lead to fatigue, loss of morale, and operational deficiencies.
Pierre Trudeau is said to have commented once that “the essential ingredient of politics is timing.” With Iran’s economy in shatters and the regime’s popularity on the decline, ongoing events offer a unique opportunity to induce positive change in Iran. This requires providing direct and indirect assistance to the Iranian public in their struggle against the regime.
To this end, the US and its allies should ratchet up the pressure on Tehran and adopt a maximalist stance in the nuclear talks by demanding political reforms. Given the current situation, a “no deal” situation is preferable to a deal which would bestow legitimacy upon the regime. Furthermore, regime assets must also be frozen and used to shore up the opposition. Finally, efforts to provide the Iranian public with an alternative means of communication must be accelerated to cripple the regime’s ability to maintain and/or re-establish its monopoly over internet and telecommunication lines.
Nima Khorrami is a research associate at The Arctic Institute’s Center for Circumpolar Security Studies and the OSCE Academy in Bishkek.

Carnegie does not take institutional positions on public policy issues; the views represented herein are those of the author(s) and do not necessarily reflect the views of Carnegie, its staff, or its trustees.
Sada’s new podcast, Tamakon, focuses on presenting women’s perspectives on the critical issues impacting the region.
1779 Massachusetts Avenue NW
Washington, DC 20036-2103
Phone: 202 483 7600
Fax: 202 483 1840
In a complex, changing, and increasingly contested world, the Carnegie Endowment generates strategic ideas and independent analysis, supports diplomacy, and trains the next generation of international scholar-practitioners to help countries and institutions take on the most difficult global problems and safeguard peace.
© 2023 Carnegie Endowment for International Peace. All rights reserved.
By using this website, you agree to our cookie policy.
You are leaving the website for the Carnegie-Tsinghua Center for Global Policy and entering a website for another of Carnegie’s global centers.
你将离开清华—卡内基中心网站，进入卡内基其他全球中心的网站。

Share. Facebook Twitter Pinterest LinkedIn Tumblr Email
Previous ArticleImmigration enforcement surge since pledge to tackle illegal working – GOV.UK
Next Article When the Ucas deadline for 2023 study is, and what you need to do – iNews