By Dr. James M. Dahle, WCI Founder
The less you spend on medical school, the less likely you are to graduate with a massive debt that will affect your happiness, lifestyle, specialty choice, and job choice. Like college tuition, the average tuition for medical school has been skyrocketing in recent years.
Despite two highly publicized “free tuition” schools, the vast majority of medical schools are expensive enough that if you pay for the entire thing (plus living expenses) with student loans, you will end up owing at least $200,000 after you’re finished.
This has become a yearly exercise where we take a look at the current costs of going to medical school. The American Association of Medical Colleges (the MD organization) publishes a list each year of medical schools you can sort by the cost of tuition, required fees, and health insurance. If you do this, you will discover that there are 18 schools where your all-in required costs (not including living expenses) are less than $30,000 per year (there were 19 such schools in 2021-2022). Unfortunately, you will also discover that almost all of them require you to be a resident of Texas, Puerto Rico, New Mexico, Nebraska, or North Carolina. Outside of those states, your choice of cheap schools will be severely limited. 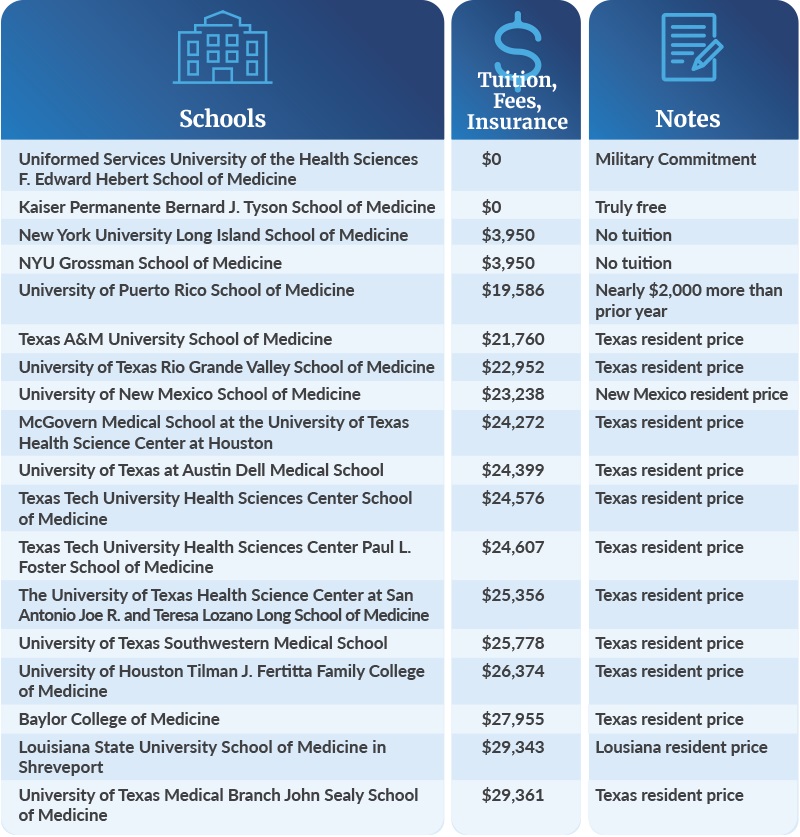 Now, a few notes on these schools.

The Uniformed Services University of the Health Sciences F. Edward Herbert School of Medicine in Bethesda, Maryland was named after a New Orleans congressman who, prior to his political career, was a journalist who uncovered serious corruption in Louisiana politics. He was Louisiana’s longest-serving congressman and was prominent on the House Armed Services Committee.
At any rate, USUHS is both the cheapest and the most expensive medical school. Not only will you pay nothing for tuition, fees, and health insurance, but they will actually pay you as an O-1 (2nd Lieutenant or Ensign). That’s a base pay of $3,477.30 per month [2022] plus a tax-free Basic Allowance for Subsistence (BAS) of $311.68 per month plus a tax-free Basic Allowance for Housing (BAH) of $2,652 ($2,706 with dependents) for a grand total of $6,440.98 per month ($77,291.76 per year). And you can count on a likely raise every year. Being paid more than $77,000 per year to attend medical school? The price doesn’t get much better than that. Unfortunately, it is also the most expensive medical school in that it will cost you seven years of your life. If you want to spend your career as a military doctor, this is the best place to attend medical school. If you do not want to be a military doctor, enrolling here will be the biggest mistake of your life

Kaiser Permanente Bernard J. Tyson School of Medicine in Pasadena, California was named after the former chairman and CEO of Kaiser. He died in 2019, about the time the school was started. Kaiser is currently the only truly free medical school in the country. While California is not the cheapest place to live, you will pay no tuition, fees, or health insurance premiums. However, the school has only promised to waive tuition for its first five classes. So, if you enroll there by the fall of 2024, you’re good to go (though it could cost you close to $35,000 per year in housing costs). We’ll see what happens after that. As a private school, residents of any state can apply and have a chance to get in.

NYU has two medical school campuses. It used to be that the cheapest one was on Long Island and the very slightly more expensive one was in Manhattan. For this year, at least, both cost exactly the same. NYU got a ton of publicity a few years ago when it started waiving tuition for its medical school. Lots of people may not have realized that you still have to pay fees and health insurance premiums, which total as much as $4,000 per year. Plus, you have to cover the cost of living in New York. Not exactly free, but considering that NYU used to be one of the most expensive medical schools in the country, this is a substantial improvement. Plus, it’s one of the few places on this list where non-residents can be accepted at all.

If you are a resident of Puerto Rico, this is your “in-state” school. While there may still be some bias against a Puerto Rico grad, it is generally considered easier to match from there than from other schools located in the Caribbean, because it is still considered a “U.S. school.”

Perhaps best known for its football team, A&M also has a cheap medical school in College Station (near Houston).

The University of Texas has six campuses: located in Austin, near McAllen on the Mexican border, in Houston, in Dallas, in San Antonio, and in Galveston. Three have interesting names. The first is in Houston, named after pediatric allergist John P. McGovern who donated $75 million to the school. No, I have no idea where he got his money from. The second is in Austin, where they slip the name “Dell” into the title. Michael and Susan Dell pledged $50 million to the school over 10 years. The third is the University of Texas Health Sciences Center at San Antonio Joe R. and Teresa Lozano Long School of Medicine, which boasts the longest and most intriguing name on the list (why can’t he have his full middle name in there too?). Joe Long was the chairman of First State Bank and donated $25 million to the school. All half-dozen of these schools provide an inexpensive medical education.

If you’re a New Mexico resident, this is your state school. If you’re a non-resident, it’ll cost you $51,834 per year.

Texas Tech has two campuses. Texas Tech University Health Sciences Center Paul L. Foster School of Medicine is in El Paso and is named after a billionaire who was the chairman of the board of Western Refining. He donated $50 million to the school. Meanwhile, Texas Tech University Health Sciences Center School of Medicine is based in Lubbock. There are many Texas schools on this list. Texas has long been known as the cheapest state in which to attend medical school, and 11 of the 18 schools on this list are located in the Lone Star State. Non-residents can attend Texas schools, but they’ll end up paying more. However, that amount is sometimes less than resident tuition in their own states! In this case, non-residents will pay $39,558 per year to go to El Paso and $37,676 per year for the Lubbock campus.

This is another inexpensive Texas public medical school.

Yet another inexpensive Texan medical school located in Houston. It separated from Baylor University in 1969, and it has had a very interesting history. Despite being private, out-of-staters have a higher (but still reasonable) bill here of about $40,000.

Another inexpensive public school, LSU charges just under $30,000 per year.

The American Association of Colleges of Osteopathic Medicine (the osteopathic medical school organization) publishes a similar list each year. However, it does not include health insurance in its totals—just tuition and fees. Even so, there were only two schools that came in under $30,000 for the 2022-23 school year, and that was just for in-state residents.

The Texas College of Osteopathic Medicine is associated with the University of North Texas Health Sciences Center in Fort Worth. If you’re a Texas resident, your total tuition and fees are $29,689, more than $6,000 than it was in the previous year. It’s a public institution in Texas, so it’s no surprise that it’s the cheapest DO school in the country.

The West Virginia School of Osteopathic Medicine is in Lewisburg. It is also a public university. In-state tuition and fees come in at $27,733

I hope you enjoyed that romp through the cheapest medical schools in the land. It looks like we have a little extra time today, so let’s create a Wall of Shame while we’re at it, discussing the most expensive schools out there.

The wall of shame. All of these medical schools charge an egregious amount for tuition, fees, and health insurance, and they should be ashamed of themselves. If you just sort the AAMC list for highest cost, you’ll quickly discover that the highest costs are charged to non-residents at state schools. For the 2021-22 school year, these include: 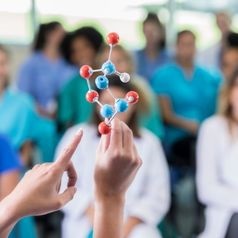 The University of Washington wasn’t even on this list last year. Now, it’s the most expensive medical school in the country. There is some good news for University of South Carolina students. Even though they’re still north of $90,000 per year, at least the price from 2021-22 to 2022-23 increased by only a couple hundred dollars. And yes, it is incredibly embarrassing to see my own medical school (the University of Utah), where I was a non-resident while attending, on this list.
Let’s also do a top-10 for the private schools, public schools for residents, and the DO schools.

Interestingly, the most expensive private school last year was the Geisel School of Medicine at Dartmouth, but it increased its costs by only $6 for this year and, thus, fell down the list.

Remember this category does not include health insurance—just tuition and fees for the 2020-21 school year.
It’s worth noting that the most expensive school here, Chicago College of Osteopathic Medicine/Midwestern University, increased its cost by more than $4,000. These schools cover a wide range, but you can certainly spend at least as much money on an osteopathic medical education as a private allopathic education.

Unless “free medical school” becomes a lot more popular, the average physician is likely to graduate with increasing levels of debt. It’s important to come up with an effective long-term strategy on how to pay for medical school. Keep in mind there is a dramatic difference between paying $75,000+ per year and paying $25,000 per year. As a general rule, most pre-meds should still choose to attend the least expensive school they can get into.


The book summarizes the most important information on the blog and contains material not found on the site at all. Straighten out your financial life today! Also available on Audible!
Click to learn more!
If you don’t know who you are, the stock market is an expensive place to find out.